The Toads Anniversary on Mandela Day!

Dear Members of The Imaginary Garden with Real Toads, 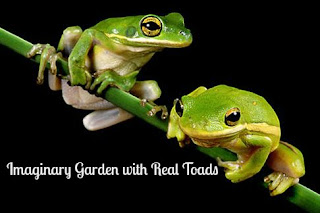 Today is the FOURTH anniversary of our Group Project! From very humble beginnings back in July 2011, we have taken this concept of a small core of member poets who wanted to work closely together, founded on the principles of the improvement of our writing, the benefit of long-term support and consistent feed-back on one another's work and we have seen it develop over the years into one of the most influential way-stations for poets in the blogosphere.

We have had many different members over the years and each has left his or her mark, but there are several founder members who have formed the back-bone of the blog and whose on-going support is still strongly felt: Sherry of Stardreaming with Sherry Blue Sky, Ellen of Ella's Edge, Marian of runaway sentence and (Yours Truly) Kerry of Skylover. In addition to these, we were joined by both  Kenia of A Exercise on Existing and Fireblossom of Shay's Word Garden in the first six months and many other long standing members.

At present, 11 of our members provide a mid-week challenge and an additional 3 conjure up our Sunday Mini-Challenges, with 2 members having both a weekly and weekend slot. It is also worth mentioning that an Open Link has been provided every week since the blog's inception, with 181 OLMondays and 28 Tuesday Platforms. I believe we owe a debt of gratitude to every person who has contributed, either with their inspiring prompts or by sharing their poems and comments. You have made The Imaginary Garden the creative space it is today through your own unswerving endeavours.

In addition to July 18 being our anniversary, it is also Nelson Mandela International Day, adopted by the United Nations. In the spirit of Nelson Mandela's self-sacrifice for the good of humanity, the theme of this day is to give a little of your time to help others. You may wonder: What Can I Do? There is no deed too small that it does not make a difference in someone's life. Traditionally, the Nelson Mandela Foundation asks that people donate 67 minutes of their time to a cause or task of their choice. I have given my 67 minutes to The Imaginary Garden in updating the Home Page so that we may enjoy another year of growing and sharing through the power of words and free speech.

I extend my best wishes to all toads, friends, poets in the hopes that you will have a day filled with joy.

Imagined By Kerry O'Connor at 3:42 AM
Email ThisBlogThis!Share to TwitterShare to FacebookShare to Pinterest
Labels: Mandela Day, Real Toads. Anniversary

A newcomer here, I enjoy playing in your garden. Happy Anniversary, and thank you for adding delight to my life! It's the time of night here when I start thinking about getting to bed - just having a quick check of the computer first, lol - but I look back over my day with your 67 minutes in mind (an idea I had not come across before) and realise I spent about half that time listening to someone who needed to talk, and half helping to distract some other people, if only temporarily, from a huge cause of worry and concern. I'm glad to discover I did those things. :-)

67 minutes for change...such a beautiful, (and practical!), concept. Thank you, so much, Kerry for bringing your 67 to the garden so many times...the pulse of the garden. Also for bringing the awareness of Nelson day!

A wonderful day to all and gratitude to all that contribute...Happy Anniversary!! :)

Happy Toad-iversary, Kerry and the team. :) Thanks for the learning and the fun each week. :D

Thank you Kerry, for all you(and the other founding members) have done to create a truly unique poetry site, one that always supports and inspires. I have said it before, but never hurts to say it again: The Imaginary Garden is the best and most consistent site for writers I have found. There are so many poems I would never have written without the challenges and inspiration given here. Many many thanks to the whole community.

Happy toads anniversary and Mandela day. Thank you for the welcoming and encouraging visits and comments. I'm a newcomer but I feel like I have made so many age old friendships. A wonderful day to all

Happy toads anniversary and Mandela day. Thank you for the welcoming and encouraging visits and comments. I'm a newcomer but I feel like I have made so many age old friendships. A wonderful day to all

Wishing you all a very happy fourth anniversary and Mandela day :D Its been such a pleasure sharing poems with you all.. learning so much along the way.
Hope that this wonderful atmosphere sees several more of joyous days to come ahead :D

Thanks for hosting Kerry, have a wonderful weekend :D

I have learned much here. Thank you.

Dear Kerry--thanks much for this post and the information re Mandela Day! But thanks more for your thoughtfulness and intelligent and passionate and sensitive and poetic leadership! They are a gift that you give so freely and kindly, always carrying wisdom. Thanks. k.

My very best wishes to all associated with this project and especially Kerry. Despite the fact that I have remained absent from the garden for a long time, I must confess that this has been a wonderful source of creative sustenance and support for poets of all ages. The enthusiasm and input that this platform provides is absolutely wonderful and such projects bring poetry closer to our everyday lives. Congrats and keep going...

Kerry, this site has achieved - and far surpassed - the purpose for which it was formed, and that is in large part due to you and your intelligent, steady and integrity-based stewardship, as well as the loyalty and participation of the core members through these years. There are times when I am so stretched I dont participate as frequently as I would like. But the Toads prompts and challenges, and the caliber of the work being produced by the other members, is what stretches me beyond my comfort zone. If my work has grown at all, it is in large part thanks to The Toads. I do think it is one of the highest caliber writing sites on the web. Congrats to all of you who have made it what it is.

Thanks for giving, Kerry, and for reminding us how important it is to do the same. I've been quite delinquent lately, but I'm always watching...

Wow, WOW. Can it be possible that we have been doing this together for four years? Unbelievable. I am so grateful for that moment way back, Kerry, when you tapped me on my virtual shoulder and asked me to join. I owe a great debt of gratitude to you and to everyone here for support, camaraderie, love, and... honestly, participating here has made me a much stronger writer. And I see the same in many of you as well. Thank you.
Mandela Day... I shall reflect. Thank you for that nudge, too.
The updated page looks fantastic!
xoxoxoxoxo & ribbit, & peace.... MK

Dear Kerry and Toads! Belated congrats~ I love this offering and was out of state~ I am sorry, I just got home! Kerry, thank you for all you do~ I love the update, the banner and how gorgeous and welcoming all of you are~ Cheers to 67 minutes-a beautiful concept~ Best wishes to all poets-you make the world more beautiful~

I truly am thankful for this beautiful garden of toads. It feeds my creative spirit and I truly consider each of you friends. There are so many poems I would never ever have written and I am truly grateful. Here's to another wonderful year.

Thank you, friends, for the delightful comments. I have been away from home today (taking my daughters back to their university town) and was so gratified to find these many thoughtful remarks upon my return.

I am grateful to have hopped into the pond. Congratulations on this 4th anniversary, and good wishes to all on Nelson Mandela Day ~

Happy Anniversary! I have been blessed beyond words by this group.