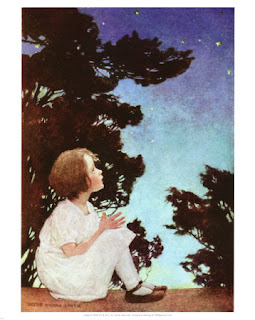 
The Pleiades
This titled form was invented in 1999 by Craig Tigerman, Sol Magazine's Lead Editor. Only one word is allowed in the title followed by a single seven-line stanza. The first word in each line begins with the same letter as the title. Hortensia Anderson, a popular haiku and tanka poet, added her own requirement of restricting the line length to six syllables. 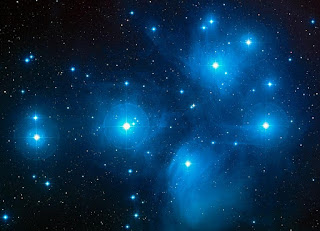 Stellar siblings. With an age that is only 2% of the sun, the Pleiades cluster is so young that its stars still drift through space together.

Background of the Pleiades: The Pleiades is a star cluster in the constellation Taurus. It is a cluster of stars identified by the ancients, mentioned by Homer in about 750 B.C and Hesiod in about 700 B.C. Six of the stars are readily visible to the naked eye; depending on visibility conditions between nine and twelve stars can be seen. Modern astronomers note that the cluster contains over 500 stars.
The ancients named these stars the seven sisters: Alcyone, Asterope, Celaeno, Electra, Maia, Merope, and Tygeta; nearby are the clearly visible parents, Atlas and Pleione.

The poetic form The Pleiades is aptly named: the seven lines can be said to represent the seven sisters, and the six syllables represent the nearly invisible nature of one sister.

Imagined By Kerry O'Connor at 1:10 AM
Email ThisBlogThis!Share to TwitterShare to FacebookShare to Pinterest
Labels: Mini-Challenge

I learn something every day. Mines a bit clunky but I tried!

I fear the biggest challenge lies in avoiding cliched phrases and too many adjectives. I have not tried this form myself before, and scribbled one down by way of experiment. I think I may need to take some time to polish it up, but here is my rough copy:

How delicately he
hacks at the rain wet soil,
hoping for juicy worms,
high-held crest like a crown
happened upon a poor
hick dressed in black and brown:
hear his strange whooping call.

That last line is a killer! Great inspiration in this challenge, though!

I've never tried this form before (never even heard of it). Thanks for introducing me to it.

A bit of a struggle. Kerry, I liked what you said about avoiding too many adjectives; Mark Twain once said,"If you see an adjective, kill it1" 8-)

And I totally missed the fact that each line should have started with the same letter! Sorry! The number seven fogged my brain...