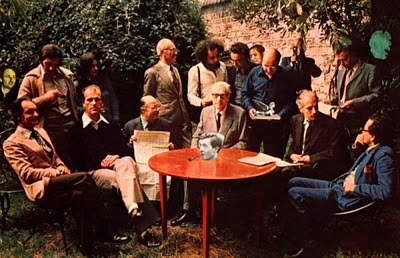 (OuLiPo in Boulogne, near Paris, on September 23, 1975)
Hello Toads! It's Kenia here and today I want to tell you a little about OuLiPo.

“A rat which constructs the labyrinth from which it proposes to escape”, that’s the definition for an Oulipian, a participant in the OuLiPo (Ouvroir de Littérature Potentiel, or, Workshop of Potential Literature), one of the most important literary groups in history, still active, which brought together important names in literature and mathematics like Albert-Marie Schmidt, Italo Calvino, Marcel Duchamp, Georges Perec, Jacques Roubaud.
Raymond Queneau, the founder of OuLiPo, wrote in the 1963 essay "Potential Literature," their objective was, "To propose new ‘structures’ to writers, mathematical in nature, or to invent new artificial or mechanical procedures that will contribute to literary activity: props for inspiration as it were, or rather, in a way, aids for creativity."
OuLiPo proposes freedom in writing by the use of constraints. In constrained writing, the writer is bound by some condition that forbids certain things or imposes a pattern. Oulipians believe it is the best way to trigger ideas and produce literature in the making, the only type they acknowledged.
Here are a few examples of Oulipian contraints:
Watermark
Select a number of phrases containing a given word. Delete the word in each phrase. Build a short poem with what remains.
Sardinosaure
Think of two animals such as the last syllable of one is the first of the other, as gazelle and elephant, or okapi and pigeon. Invent a chimeric animal by mixing their names, like gazelléphant, or the okapigeon. Such animals are generically called the Sardinosaures, named after the first of this family, invented by Jacques Roubaud. Write a short text describing the animal, drawing on the specifics of the two parents of the chimera.
S+7
Replace each noun in a given text by the noun to be found seven places away in a chosen dictionary.
Stress the prisoner
A prisoner wants to send a message but has only a tiny paper. To save space, it makes his message by avoiding all the letters with ascenders and descenders, remaining only a , c , e , i, m , n, o, r , s, u, v , w , x , z.
Snowball
A poem in which each line is a single word, and each successive word is one letter longer.

Univocalism
A poem using only one vowel, although the vowel may be used in any of its aural forms. For example, "born" and "cot" could not both be used in a univocalism, unlike "sew" and "beau".
You can see other contraints on the OuLiPo official website (in French) and today's challenge is to use one of the constraits above mentioned to write a poem.
Link your poem, leave a comment and provide a link in your blog to Real Toads. Have fun!
Imagined By Kenia Santos at 9:05 AM
Email ThisBlogThis!Share to TwitterShare to FacebookShare to Pinterest
Labels: Kenia's Challenge

Gosh Kenia! This is truly something to wrap the brain around. Should be great fun to see the results.

Talk about wrapping the brain around something, it isn't even time for me to be up, but I am, thanks to the dog. My husband got some nice sunrise shots, and I get OuLiPo.
Wow!
This calls for coffee.
Strangely enough, in spite of or perhaps because of my half-wakened state, I can see the value in restricting the poet—I can see it but I'm glad I don't have to explain it.

Sorry my first one got there twice. That seems to happen sometimes, and computers are harder to understand than some writing challenges.
So, #1 and #2 are the same, #3 is completely different.
K

I'm glad Kay liked the challenge enough to try almost all the exercises! <3

My piece is up.

Bloody blogspot. I wrote a long comment which I was told was an error and could not be posted or some such gobbledegook. I would come here more often if it were on Wordpress!

Having just completed one of Margo Roby's exercises (forbidding adjectives, adverbs and similes) I might just be in the mood for these constraints. I may be some time...