It is my pleasure to introduce you to Penny Smith, aka Jinksy. She lives and blogs in Havant, United Kingdom. Her sense of humor and artistic style have captured the attention of many fans, including myself. This quote can be found on one of her blogs, Napple Notes (which we will talk about in a minute) and I think it aptly describes the woman we have here today:

...ponderings from the pen of a poet, via the heart of a human, often touched by the wicked sense of humour of an observer of oddities...
~Jinksy

Please... tell us the story about Jinksy.

All 4lb 2oz worth of Penelope Anne Jinks arrived on the scene, two months early, in March 1941. The bombs missed me – probably because I was such a small target. This didn’t stop me considering myself a grown up, and other children aliens almost from the word go. Now I like to make up for what I missed by reveling in my second childhood. Ask my grandchildren.


I'm glad you are having fun with your grandchildren. I think young ones help us appreciate the moment and maintain a certain peace of mind, which is necessary when writing like you do. What inspired you to begin blogging?

My brother emigrated to New Zealand with his family when our eldest kids were about six, and our younger two half that age. The four cousins flourished on opposite sides of the world and grew up in the twinkling of an eye, as kids do, until one of my Kiwi nieces, now with two children of her own, joined the Happy Band of Bloggers on Blogspot.com. She persuaded me to join too, which I did on Christmas day 2008, with my first post hitting the screens on Boxing day. Here it is:

Evening dark enfolds the waiting city.
Children dream, perhaps of Santa Claus,
while juke-box music churns its tuneless ditties
into the streets where nobody gives pause
to think of Christmas.

The midnight hour solemnly approaches;
a small group congregates in vacant pews,
their measured footsteps rhythmically encroaching
upon a silence echoing with the news
of that first Christmas.

Around the crib the candlelight is flickering,
but muted organ notes cannot compete
with raucous sound of angry voices bickering
from drunken revellers outside in the street.
Can this be Christmas?

Expectant landscape waits for welcome silence,
as moon and stars continue on their way
around a world beset with wars and violence
which needs the gift of Peace as much today
as that first Christmas.

You have three blogs, Napple Notes, Alias Jinksy, and In Tandem, which have garnered much attention in the blogoshpere. Tell us about them.

Napple Notes turned me into a daily blogger, with a mix of prose and poetry in each post.
Then, thanks to David McMahon’s Post of the Day (a key feature in Blogland at that time) I discovered Hilary at The Smitten Image**. She it was who finally persuaded me to post pictures too. You can read about it here. To start with I had been a dyed in the wool, ‘paint pictures with words only’ person. Here is a poem describing how Napple got her name:

Adam and Eve bit that infamous apple
when temptation entered the scene...
Many years later, I turned into a 'Napple'...
how ever could this have been?

A plain 'Granny Smith' was how I began
to be called as my family grew,
and my number one girl first made me a 'Gran!'
Once Baby talked, what did she do?

'Granny Smith' had became 'Granny Apple'
but by Baby the words got condensed,
and Lo, and behold! I was "Napple"
and rather than being incensed

I welcomed the name, joined in the game
and Napple I've been ever since!

Blog number two, Alias Jinksy, came into being as a place where I could concentrate more on poetry, minus the Napple waffle, and I started writing to other people’s prompts – especially those of Tess at Magpie Tales. Her pictures triggered my arty side, and I began exploring the possibilities of my computer graphic software until I got so engrossed, I wanted more! I bought a Bamboo tablet and pen, and am still learning about its capabilities – not to mention mine. Thus was born my third blog, In Tandem, where once a week I post an original artwork by any blogger willing to allow their work to be used as a prompt, or failing that, a graphic by me. Here's my latest: 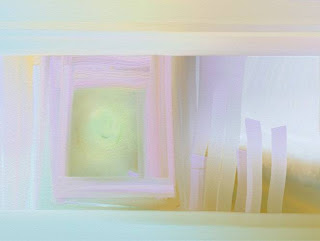 That's beautiful... I love participating in your weekly In Tandem picture/graphic prompt! Tell us Jinksy, what is poetry to you? How would you define it?

I guess written poetry is where people express all those thoughts which don’t fit into the world of the mundane, but I think you can have visual poems and auditory poems too – otherwise known as pictures and music! The rhythmical sounds of spoken words come into the category of music, and for me, rhymes add counterpoint to their melody. I admit to being a rhyme freak.

Which came first- poetry or art; and how do you compliment one with the other?

That is a chicken and egg question. By seven, I was already wielding a mean pencil. It lead me on to a scholarship, and five years at art college. I was twenty three before I hit the big bad world, and had written poetry since I was in my teens, so there’s never been a time where one didn’t affect the other at some level. But technology, and the delights of this new computer my generous son bought for me this year, have allowed me to uncover a world of graphics I could never have imagined before. Sometimes a poem comes first, and I create a graphic, and sometimes a graphic sparks my imagination for a verse! Since I create both, there’s not much of a dividing line. The result is a Jinksy combo, can't-see-the-join blogpost.

I notice you write daily and never seem to run out of creative, unique pieces. Where do you get your inspiration?

It comes from all quarters – life’s ups and downs, I suppose. So many situations are farcical, it’s no wonder I often opt for the humorous approach, although my dreamy, philosophic side continues to hover nearby. Any of the five senses can trigger my imagination – all I have to do then is follow where it takes me.

Do you have any advice for aspiring poets?

Probably, number one is keep on writing. Exploring different kinds of poetry others have written can work in different ways – it can frighten beginners to death, as they say ’I can’t do that!’ or it can fill them with enthusiasm –‘I want to do that too!’ The trick is to find where you are comfortable with yourself, then to have an open mind as to how you might develop. There’s a lot to be said for trial and error as you try to create a way of writing which suits you, and pleases others! Not always the same thing…

Anything I left out?

What better place to mention editing? Learning how much to leave out is as important as knowing how much to put in. Less is often more, and the fewer mistakes in spelling and grammar in a finished work, the better. On the whole, breaking rules can be fine, as long as you’ve first learned to follow and understand them.

Thank you so much, Jinksy, for letting us into your bright world and sharing a little of yourself. It has been a pleasure getting to know you better.

I'd like to leave you with this from Jinksy:

Fear not, this is not another sign of Jinksy lunacy that has suddenly engulfed me. No, it simply means that occasionally, when I happen across something I wrote some time back, whether in a notebook, on a scrap of paper or amongst the pages of my blog, the words suddenly take on an extra depth of meaning. It's almost as though they belonged to somebody else, and I was reading them for the first time.

This happened again yesterday and today I want to let you read them too.

Time is the warp of life and our stories the weft which creates the fabric of our existence. A cloth woven in such a manner has to link us, as weavers, each one to the other, in a global tapestry.
Imagined By Laurie Kolp at 6:36 AM
Email ThisBlogThis!Share to TwitterShare to FacebookShare to Pinterest
Labels: Interview

Thanks for this interview. I have wondered about Jinksy as I have seen her name so often! What a nice lady she looks from her picture, too.

Laurie, you have made a veritable silk purse from my sows ear! LOL Bless you for all the hard work you put into producing such an in depth interview - only half of which I knowingly provided. I'm amazed, for it shows that you've read and noted much of my verbal diarrhoea in the past! Hehehe! ♥ Thank you. ♥

What an absolute delight to read this insightful interview with the remarkably talented Jinksy. Thanks to both of our members for the effort that went into this post.

What a great interview! What a wonderful person is Jinksy/Napple/Penny in all her incarnations.
I absolutely agree with "breaking rules can be fine, as long as you've first learned to follow and understand them"! I love to do precisely that, and get so annoyed when people unskilled with the language try to play around with it. It's like a musical instrument: you can't play if you haven't learned.
I'm so pleased to get to know Jinksy!

I love this interview! I knew Penny was talented, but didn't know how far out her colorful fingers reached!
Wow!
Beautiful words, thoughts and insight~ Well Done ladies~

Loved this!
Jinksy always leaves comments with depth. It's nice to see into her world and mind a bit more.

I'm so happy to learn more of Jinksy/Penny, who I have grown to consider a friend - a virtual one anyway! Thank you for posting the interview.

Thanks, Jinksy... I really enjoyed it!

Really interesting and entertaining - congratulations, and thanks, to both of you.

Great interview. Jinksy is incredibly talented, and she does have a really wicked sense of humor.

Jinksy, I loved the black and white photograph... Such a slice of history and autobiography wrapped up in it. I am trying to imagine what your mother had just said to her girls, before the camera clicked definitively.

On another note, there was a prompt some weeks ago referring to guerrilla poetry, and I have been thinking about it, and then decided to do it! I just posted a piece about it, and thought I'd let you know, since you inspired me to it :)

Love the interview.. great to know more about you Jinksy

I'm honoured to be a part of a global Blogworld that lets us all interact in this way. Life would be poorer without it! Thanks, people!

Good to read more about you Penny and I love the photos of you too. x