There are a number of reasons why an individual would choose the form of an open letter, including the following reasons:
·      As a last resort to ask the public to judge the letter's recipient or others involved, often but not always, in a critical light
·      To state the author's position on a particular issue
·      As an attempt to start or end a wider dialogue around an issue
To continue reading this Wikipedia entry, click HERE.

There are many interesting and enlightening open letters available, and it was difficult for me to choose one but I thought, as writers, we would enjoy Harper Lee's open letter to Oprah Winfrey on the value of reading. 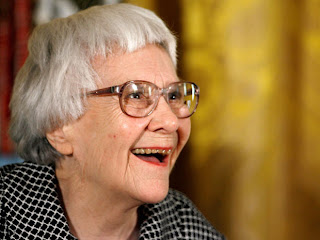 It is not the first time we have explored the possibilities of Epistolary poetry on Real Toads. Indeed, I set such a Wednesday Challenge back in 2011. Now I wonder if it is possible to translate the idea of an open letter into poetry and I leave this challenge with you today. Write a poem in the form of an open letter and disseminate it through means of the internet by posting it on your blog and linking it up to Real Toads.
One final note: As this is poetry, the premise of your letter or its recipient may be fictitious, if you so choose.

wow, I know where I'm taking this but it might take some time since I'm still sick in bed.

you've really pushed me to write this, I might even send it somewhere because it's something that really matters.

A very intriguing prompt, Kerry, but a difficult one for me. I'll brood over it and see if anything happens.

me too, am considering writing an open letter to the germs of the world. eh, maybe not. but still, love this challenge, Kerry!

You don't make it easy for us, do you? :-)
I added a ghazal with inner rhyme added and typographically altered to show how really easy they are to write.

This actually made me tear up as I am not certain we can make our trip to our beloved small town this year.

cue Willie Nelson before you read mine.

My poem may be more appropriate for match.com. :-)

Hi Kerry, what a lovely prompt. I wasn't sure how to approach this at first, but then a walk in the park sparked an idea for my poem. Thank you for the inspiration and unique form you shared. :)

Hi Kerry-- so love the Harper lee. My life is still in a bit of turmoil due to moving and work and inadvertent loss is wifi (when not at work) so ended up with something a bit rough. But fun prompt. K.

Well, LTTP once again, plus mine is pretty much the same letter I'm always writing, so I hope it qualifies in some sense of the challenge, though perhaps not as well as it could. Thanks for the inspiration Kerry-this would never have been written without it.

Back after chores to read.

I don't know if mine can be called a letter or a poem but it felt good to say it.

Ah...the helped to get out some of my frustration from the past few days...thanks!

Karen, I apologize for not reading your poem. This link does not take me to your page for some reason.