CITY
I am an ephemeral and not too discontented citizen of a
metropolis thought to be modern because every known
taste has been avoided in the furnishings and exteriors
of the houses as well as in the layout of the city. Here
you will not be able to make out the remains of any
monument to superstition. Morality and language have
been reduced to their simplest expression, at last! These
millions of people who do not need to know each other
conduct their education, profession and old age so
similarly that the course of their lives must be several
times shorter than that which mad statistics show for
the peoples of the continent. Just as, from my window,
I see new spectres rolling through the thick and eternal
coal smoke — our woodland shade, our summer night! —
new Furies, before my cottage which is my homeland
and all my heart since everything here resembles this —
Death without tears, our active daughter and servant,
a desperate Love and a pretty Crime whimpering in the
mud of the street.
(Arthur Rimbaud translated by Robert Yates)

Prose poetry originated in nineteenth-century France, reaching perhaps its highest point in the work of Charles Baudelaire and Arthur Rimbaud.  A prose poem may have any features of the lyric, except that it is set out on the page for the eye - though not the ear - as prose.
The Norton Anthology of Poetry 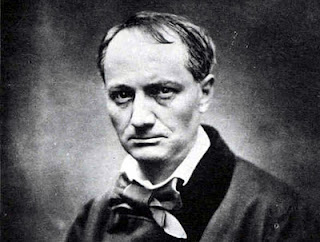 
Les Fleurs du Mal (The Flowers of Evil) is a volume of French poetry by Charles Baudelaire. First published in 1857, it was important in the symbolist and modernist movements and expresses the changing nature of beauty in modern, industrializing Paris during the nineteenth century. The principal themes of sex and death were considered scandalous. He also touched on lesbianism, sacred and profane love, metamorphosis, melancholy, the corruption of the city, lost innocence, the oppressiveness of living, and wine. Notable in some poems is Baudelaire's use of imagery of the sense of smell and of fragrances, which is used to evoke feelings of nostalgia and past intimacy. Baudelaire's highly original style of prose poetry influenced a whole generation of poets.  For examples of his work, follow this link. 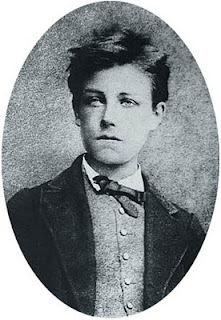 
Arthur Rimbaud is one of the world’s most influential writers, having a direct influence on as diverse an array of artists as Oscar Wilde, Federico Garcia Lorca, Hart Crane, Jack Kerouac, Jim Morrison and Bob Dylan. He wrote all of his masterpieces before the age of 20.  His major work of prose poetry, Illuminations, is considered to be ground-breaking in the genre.


Our Challenge this week is to write a piece of prose poetry. The lay-out of such a poem is entirely at the poet's discretion, so long as it is not displayed in verse or stanza.  In the example given below, poet Geoffrey Hill insisted his lines be laid out as follows:


The princes of Mercia were badger and raven. Thrall
to their freedom, I dug and hoarded.  Orchards
fruited above the clefts. I drank from honeycombs of
chill sandstone.
(from Mercian Hymns)

Imagined By Kerry O'Connor at 6:00 AM
Email ThisBlogThis!Share to TwitterShare to FacebookShare to Pinterest
Labels: Kerry's Challenge

I love this challenge, and learning about these two fascinating poets! I adore Lorca and Dylan, and have read Kerouac and Morrison extensively when I was younger. Very cool to find out about their inspirations.

PS--Know what I love about Real Toads? It's small. I feel like it matters if I come here.

What excites me about Real Toads is how willing the participants are to leap right in and extend their writing horizons. It's a beautiful thing.

This is a prompt that really interests me and should be doable, hee hee. Fireblossom, It DOES matter that you come here. I'm so thrilled that you and Hedge come to Toads - it makes it perfect for me. I like its smallness too. Also the challenges truly challenge me.

I love prose and I love Real Toads, too!

I have a work in progress, but rather uncharacteristically, I'm going to sleep on it and work on it again tomorrow.

Remember that there is no time limit on this challenge, so no need to rush off a piece to meet a dead-line.

I find that many of my list, notes, and attempts at certain types of poems lend themselves well to this! I tend to be a bit of a rambling, impressionistic writer. I enjoyed this prompt.

also.. illuminations... breathtaking in both scope and execution. i'd not seen that before (!).

okay, i am overwhelmed with my "novel" writing (hee! does it count if i can't say "novel" without giggling?) and am behind; i am wanting to write to this challenge and i may, but there's also this piece i have linked, which i actually really like, from a while back, so, heck, here is a prose-poem piece of mine of which i am enamored. i hope you will be, too. love toads!

This was a painful one for me....I am sorry I have not been more involved here...I will try to get my rear in gear....thanks for this one Kerry. :-)

erg. couldn't get the post to work tonight, so here's the most recent-past offering in a flood of prose poems.

I love this prompt and would like to have taken more time writing something for it, but I am supposed to be knuckling down to nanowrimo! :-)

So I wrote something anyway, (very quick and spontaneous.)

I may come back to this again with another one when I need more distraction from the 'novel' (giggle, marian I know what you mean. :-)) I am supposed to be getting on with. :-)

Here's mine at last - drawing on the themes of Baudelaire, with my own twist, because I couldn't pretend to be in his league. Hope it works.

Need some help in posting...1. What is the text to display?
2. Web address..what URL should link go to? Poem is ready to go!
Thanks.

You seem to have done the right thing, Lyn. Welcome to Real Toads.

What a heart-stirring, breathtaking wealth of poems from the very marrow in this challenge. Wow. I am stoked! Toads rocks!

so glad there's not a time limit for this...

oh here is something new, PLEASE don't think that i think this has ANYTHING to do with rimbaud, hah!

Sorry for appearing in duplicate, but I suddenly wondered about the three shadormas I wrote yesterday - aren't they prose too? Or are they poems simply because of following a form? I'd be interested for any thoughts on the matter...

You may post as many times as you like Jinksy, and you pose and interesting question. From what I understand, prose is completely unbound by form, syllable counts, meter etc...and the poetry lies in the phrasing, sound devices, mood, and other lyrical qualities of writing, but I'll be the first to say I'm no expert.

I'm not sure I've ever written a prose poem before. This suited my mood, this morning. Thanks, Kerry!

I'm not very sure what a prose-poem is. But here goes!