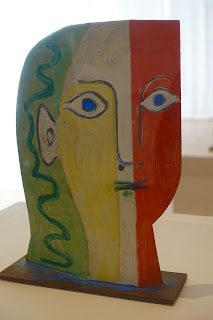 Manic-D-Daily here, flying from a week at a tax law conference in Orlando, Florida--meaning that I am feeling completely faked out.  Blank.  Flat.  (Also fat.) 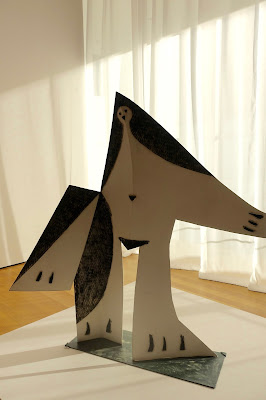 In the midst of clouds (the sky’s and mine), I have been thinking about the artificial.  If you know anything about Orlando, Florida, you will understand why this is on my mind.  All I can say is that while this town of theme parks is supposed to be fantastical, it always seems to me more plastical--

To be fair, I have not been to the theme parks for many many years. Even so, during this last week, I have felt surrounded by a lot of strange constructs--from the laser show at the hotel’s pretend islanded/pretend water-falled pool to a bunch of convoluted techniques for reducing tax liability.  (The worst of it, for me, honestly, was the food--note to self: avoid just about anything that comes in an "individual serving pack," unless that "pack" is a peel.)

And now I am moving--clouds are a great relief--from the artificial to the idea of artifice.

Artifice is a strange word.  Certainly, it has negative connotations, often carrying the idea of falsity or insincerity.  But artifice also refers to stratagems that are marked by the ingenius, the artful, the clever (tools that any artist may wish to have in her or his arsenal.) 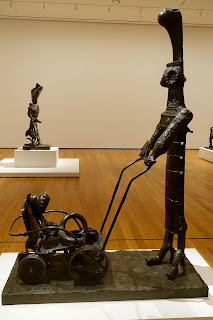 Which has led me to think about the differences between good artifice and fako artifice; and this in turn has led me to a vague notion that good artifice reveals the real (even, in an odd way, gives us the real) while bad artifice conceals, congeals, and confiscates the real.  (As in, I still have a truly icky taste in my mouth from the weirdo peanut butter licked from an individual serving pack this morning during a lecture on defined benefit plans!)

So, what does this mean in terms of a prompt?

Think about the real. It can be a moment in which you, he, she, it, or they understood that something--life, a relationship, some kind of effort--a war or peace, a loss or a struggle--was not a game. 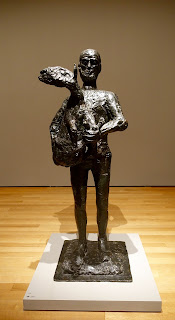 Or, think simply about some real thing---a rock, a banana.  (Something concrete but please, not concrete!  Poor Florida is covered in concrete.)

Or some version of the real that consists simply of a moment of true presence, for example, a night  in which one, walking with one's child, actually stopped to see stars. 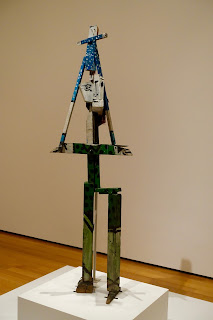 Now, think about conveying that realness in some palpable if not necessarily realistic way.  That is, with the artifice of craft.  This artifice/ingenuity, could be a traditional poetic device, such as rhyme, meter or form--but it could also just be an artful juxtaposition, a leap or a blank, a particular choice of detail or metaphor, or your uniquely clunky (or graceful) voice. 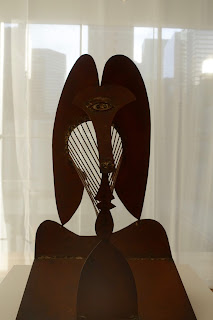 Ahem - so, what's the prompt again?

To write of something real, but not necessarily to write realistically, literally, or even grammatically.  (I keep thinking of E. E. Cummings here--who wrote some very real love and real political poems with all kinds of mash-ups,  I strongly recommend looking at any of his poems to get out of a rut.  But there are a zillion other more contemporary examples-- Robert Bly, and his use of metaphor in My Father's Wedding; or an interesting U.S. poet C.D. Wright, who died in the last week - "Everything Good Between Men and Women", )   Of course, if you want to just write of something real and not worry about the artifice part, that is fine--for myself, I would like to open the box a little.

Which brings me to the Picasso sculpture show at the Museum of Modern Art in New York.  (That's where all the pics are from.)  My photos of the show aren't great (and sadly give a very limited idea of the breadth of the show, since I only took my camera out in a couple of rooms).  Picasso's sculptural style, like his painting style, went through a host of transformations (not shown here), and he used a zillion different materials--from found objects--like the bits of a iron stove that make up the woman and child above, to cardboard, bronze, flattened metal sheets, and little etched pebbles.

Some of the most intense pieces, such as the man with the goat above, and the next group below,  were done during World War II, when Picasso stayed in Paris, though he was viewed extremely negatively by the Nazis and his work was banned as degenerate.  As a result, he had to make the plaster pieces for the bronzes in his small bathroom. (Note that I have a couple different views of the skull.) 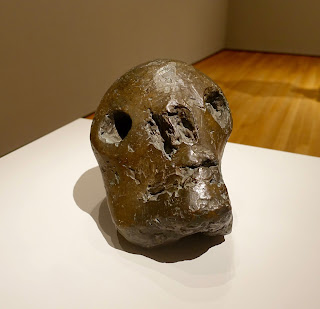 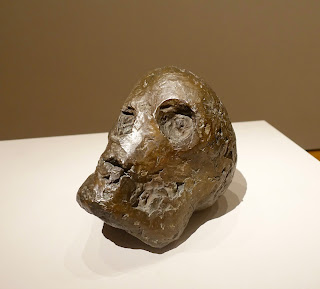 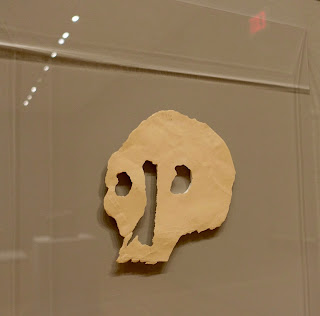 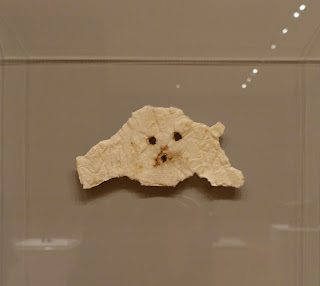 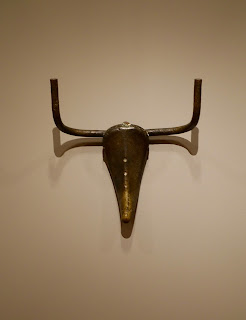 I bring up Picasso's work because it gets to something so very real, and yet it is also so full of artifice.

I post more pics below--feel free but not obligated to use them in your piece;  if you do, please give credit both to Picasso and I suppose you can identify me as photographer as well.  (Ha--my only chance ever to be paired with Picasso!) 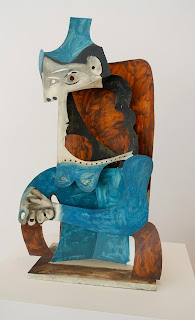 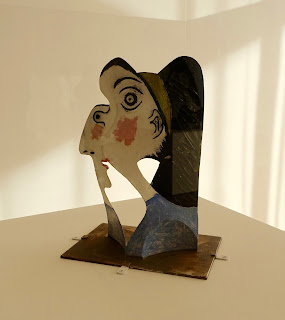 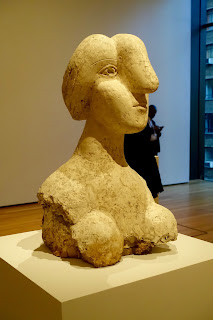 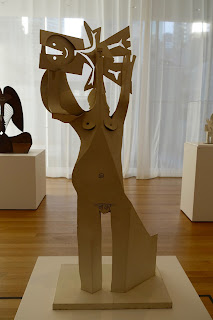 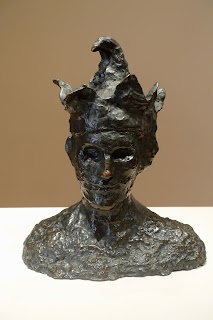 I’m sorry if this prompt feels vague--my intention is to be broad, and to encourage you and my very blank self to get back to some expression of the genuine.  (Hopefully, I can keep it in my pocket for use during one of possibly many trips into the world of the artificial.)

Please, as always, visit your virtual (yet also very real) compatriots in this craft.

Manicddaily here noting that if you can figure out what this prompt is asking for--Congratulations!!!! I look forward to seeing your work--I'll be visiting probably later this evening as going to take a walk and figure out my own poem. k.

Lots of wonderful jumping off points here, Karin. I especially enjoyed, as always, your photos of Picasso's work. I am feeling dry as a bone atm, but will see if anything bubbles up. Thanks for such a very interesting and honest challenge.

Thanks--I am going out for something to wet/whet the bones! k.

I visited Orlando back in the 80s and was struck by the fact that any reality could be faked given the necessary funds and imagination. It was an experience I'll never forget.

Thank you for a thought-provoking prompt and for sharing your photos of Picasso's pieces. Now that is an exhibit I would like to see.

Hi, Karin: Interesting! I just saw the movie Room, which very much deals with what is real vs. artifice or TV or un-reality. Can't seem to shake the film so maybe something will come up from that for sharing here.

This left me a little confused at first... but there was something with cardboard that struck a light... hmm Now off to read.

I just finished a prompt "real" for a haiku site so I'll link it. How strange that this subject is on so many people's minds this week. Or is it? Lol!

Picasso's art came in time for him to use the camera as a tool which makes his art even more interesting.

Florida is very unreal to me too! Hugs!

Hi Bjorn, I'm sorry for any confusion! I really just want to be fairly open.

Kerry, the Picasso show is worth a trip!

I enjoyed the REAL POEM part, Karin. The artifice may have been harder. You won't know on mine, which is real and which is a farce. It all sounds REAL, it might be. Only Freud might know.
Thanks for the exercise. I would like a grade if you have time. "We" might need more practice.
..

As I was walking this path the other day (behind my daughter riding our horse) I couldn't help but think I was walking through the pages of a piano book - where the notes had literally come alive. I think this works for the prompt...

Somehow .. my son and I survived eight years in Orlando! It wasn't easy. Happy Sunday, Karin.

Ha. I am sure if you have an actual house there and are not living in a hotel, it is much better! My mom lives on coast--it is very different, but she doesn't live in a Marriott! k.

this is quite an interesting prompt, i had to read the text over and over again. Finally i zero-ed in on its essence. And here i am past Sunday and now offering up by bit

Hope you enjoy this one fellow toads. A lovely Monday to all

The concrete jungle drains me and totally depletes my muse. I relate to this prompt a lot. Have a wonderful week. Thanks, Karin.

Thanks, Gillena and Carol--sorry for any confusion! Mainly wanting to offer possibilities--k.

Sorry to arrive so late...I will visit in tomorrow hours with more light. Thank you, Karen!